Knock John Fort in the Thames Estuary, England, a World-War II anti-aircraft fort, was the home of Radio Essex. The station first came on air on 27/10/65 with test transmissions on 222 metres, 1351 kHz, then began regular programmes on 7/11/65 on 1353 kHz, keeping the 222 tag. The station played easy listening music during the day with pop and hit tunes throughout the night with regular news bulletins. Radio Essex could be said to have been the forerunner to independent local radio as we know it today in the UK as its output was concentrated mainly on Essex.
After the now inevitable court cases and fines for broadcasting within British territorial waters, the station changed its name to BBMS - Britain's Better Music Station, and finally closed down under this name on Christmas Day, 1966.
Very few recordings exist of Radio Essex or BBMS but it is featured in the museum's "Radio Forts" recordings.
​ 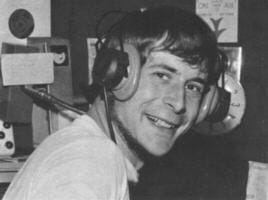 Senior DJ Dick Palmer on air in the Radio Essex studio.
Powered by